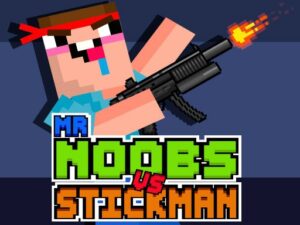 Have fun with this entertaining new action game an epic battle Mr Noobs vs Stickman is a war between an army of noob vs stickmans who can win this battle? Enjoy this exclusive new game, help move the army of little noobs to victory!
Play Mr Noobs vs Stickman Game Online For FREE Now!
Have Fun!
How to play
Controls
Video
How to play

How to play Mr Noobs vs Stickman game?

An epic war between the army of Noobs vs Stickmans has begun, you will need your ability to battle, win the battles by capturing the flag of your enemies so you can collect many coins so you can unlock new stronger soldiers and improve their skills. The objective of the game is to complete each battle by controlling your noob army and moving them to attack enemies who will not hesitate to shoot and capture your position. Play Now!

Computer: use the mouse to select the soldiers or the keys from 1 to 5Press spacebar to advance or touch the play button.

Smartphone or Tablet: touch the game buttons to select your soldiers and move your army.