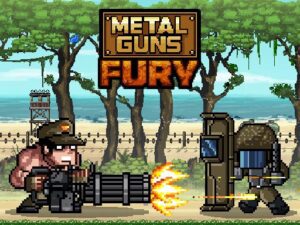 Start preparing your metal guns and join the best shooting and action arcade game. It’s time to mobilize your troops because an army of renegade slugs has invaded and taken control of an island. Play as four brave soldiers, an epic squad of glorious commandos, heroes of previous war conflicts, choose your weapons and vehicles (tanks, mechs, etc.), and attack the enemy in destructive battles. Have fun!

How to play Metal Guns Fury : beat em up game?

Engage your metal squad in epic battles and blow up all enemy army troops. Save the people on the island, rescue the hostages as they become prisoners within the enemy vanguard, defend the country, and kill the enemy commander in chief. Play Now!

Computer: use touch controls or Arrow keys to move, Spacebar to shoot