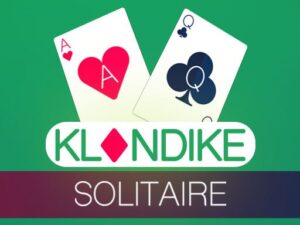 Build up four foundations by suit from Ace to King. Use Magic button, when you got stuck! Play Now!
How to play
Controls
Video
How to play

How to play Klondike Solitaire TLG?

Klondike or Solitaire is a solitaire game with cards.

To play Klondike you use a deck of French cards and, to be precise, a deck of 52 cards without counting the jokers. The face-down cards are placed on the left side of the table, then you proceed to take seven cards to be arranged from left to right without turning them over. The distribution of the cards continues making sure that on each column there is a number of cards equal to its position (in the first column one card, in the second two cards, and so on). When the arrangement of the cards is finished, start turning over each column. The optimal playing field should look like this:

Top right 4 houses, i.e. the four rectangles at the top right initially empty with the function of allowing the arrangement of cards from Ace to King.
The cards placed in the upper left corner are drawn and stacked according to the alternation of colors. These columns, always according to the alternation of colors, can be moved partially or totally. An empty column can
An empty column can be filled only with the King, or a stack of cards that has the King on top.

3 ways to draw cards from the deck:

Computer: use the mouse, then click in the card to play.

Smartphone or Tablet: use the on-screen buttons.