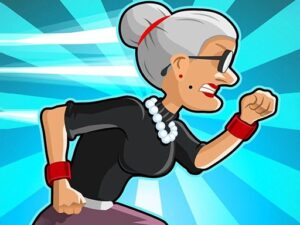 “Evil Granny, Run!” Is an endless 3D runner in which you play as a nimble granny! Grandmother is free and does not take prisoners.

How to play Angry Grandmother Run?

Run along the streets of sunny Miami and dodge dinosaurs, robots, dolphins, jump over cars and surfboards, slide under airships and other obstacles! Collect as many gold coins as possible and spend them in the play store!

This image is a thumbnail from the exciting online game Duck Shooter. Enjoy this classic Luna Park atmosphere as you aim to shoot all the yellow ducks, being careful not to hit the red ones. Put your skills to the test and challenge yourself in this captivating and intuitive game perfect for both beginners and experienced gamers!

Enjoy the classic arcade game of Duck Hunter! Test your shooting skills and reflexes by aiming and shooting the ducks before they fly away. With a cute, ironic hunting dog companion ready to retrieve your ducks, this action-packed game will challenge your hunting skills and keep you entertained. Play Duck Hunter now and start the hunt!
1
2
3
…
79